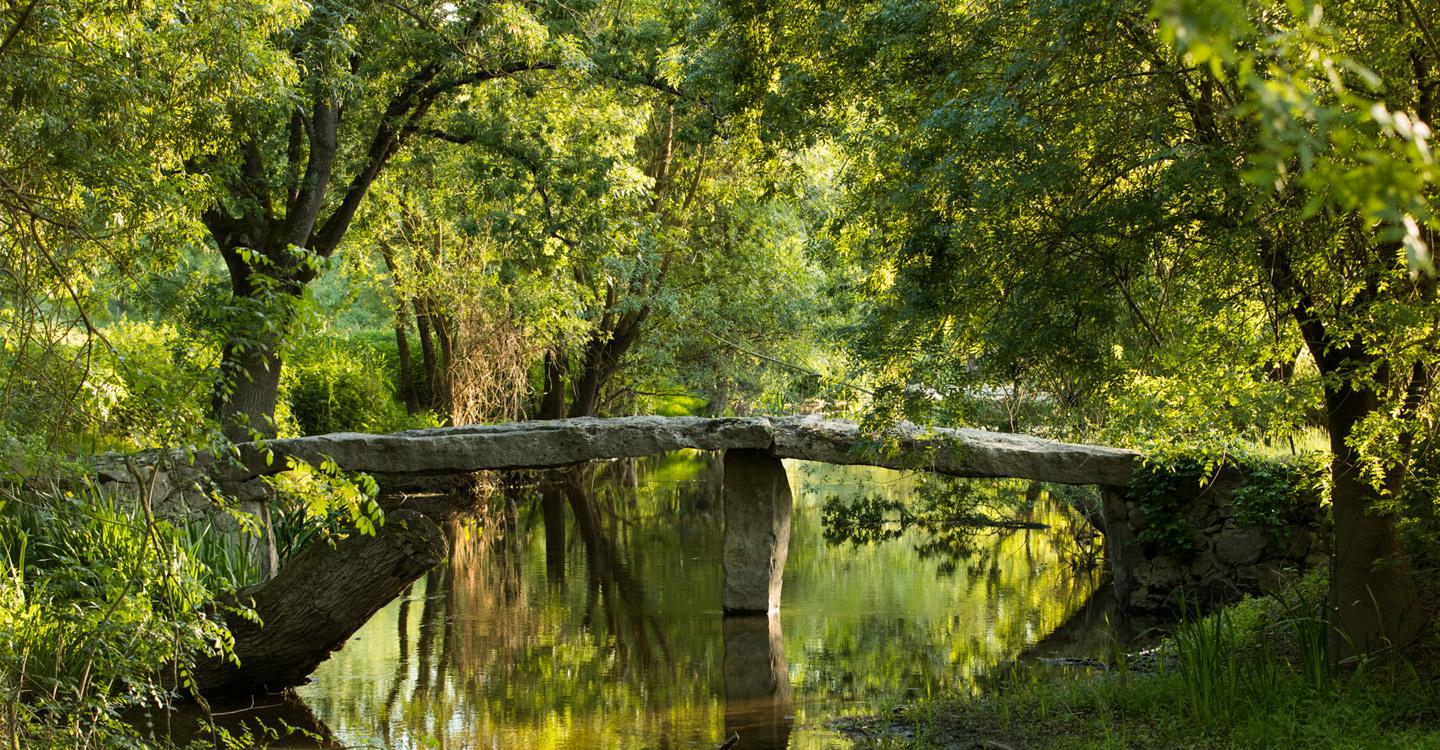 The Park territory is famous for its medieval and Renaissance castles. But did you know that you can also find the biggest dolmen of France, important Roman roads, a sarcophagi quarry dating back to the Carolingian time or even the remains of the biggest monastic city of Europe there?

From the Palaeolithic period to modern times, each period has left a diversified and high-quality heritage to the territory. These remains are precious witnesses of our ancestors’ way of life. Some of them have been forgotten during centuries before being rediscovered.

Coming right after Brittany, the region of Saumur has the biggest density of megaliths of France. The dolmens and menhirs of the Neolithic period are over 6500 years old. You can find them in the middle of a field, in a forest or just around the corner. The most famous one is the big dolmen of Bagneux in Saumur. Today, it stands right in the middle of a bar’s courtyard!

The Gallo-Roman period (1st century BC to 5th century AD) has also left its trace on the territory: an important road between Tours and Angers. The most impressive archaeological remains dating back to this period are the vestiges of the Roman Theatre in Gennes, in the Maine-et-Loire department.

Same buildings of the early Middle Ages (5th to 10th centuries) are remarkably well preserved: the Carolingian palace in Doué-la-Fontaine (9th century), the dungeon of the castle in Langeais (10th century) or the churches Saint-Eusèbe in Gennes and Saint-Symphorien in Andard. You can also find many sarcophagi made of shelly sand or limestone in the region: they were probably produced in Doué-la-Fontaine in Anjou or in Crouzilles in Touraine from where they were also delivered to the West of Gaul.

The best place to see local archaeological collections is the Joseph-Denais de Beaufort-en-Vallée museum. With its more than 7000 objects, the museum links local history with great history at all levels: archaeology, natural history, arts, … The Ecomuseum of Véron is also worth a visit: you will find territorial archaeological discoveries from the Palaeolithic period to the Antiquity. 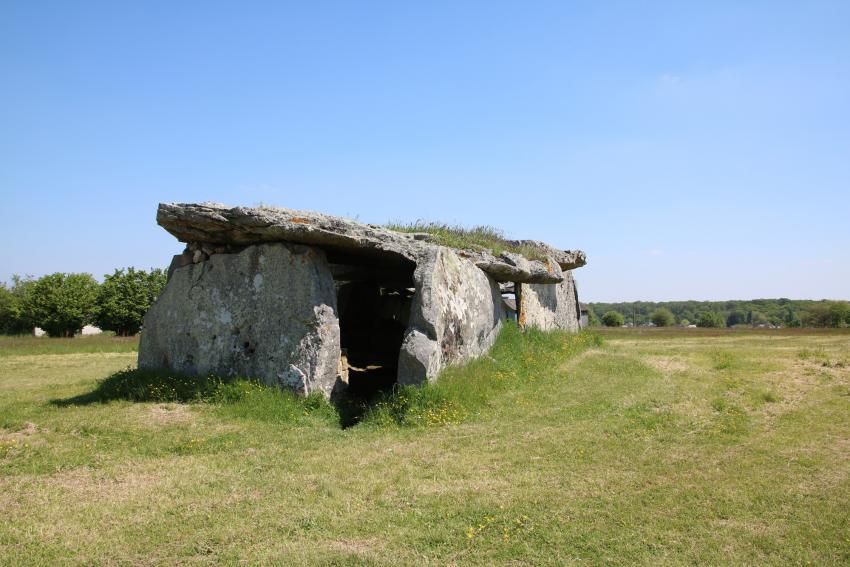 Dolmens and menhirs from the Neolithic period

Although the region of Saumur offers a high concentration of exceptional objects, we actually know very little about megalithic constructions.

Menhirs are vertically standing stones. Their function is still a mystery: have they been used in rituals? Are they calendars or limits of territories? Nobody knows the answer! On the Park territory, the finest megaliths are the so-called “Pierre Fiche” menhirs in Artannes-sur-Thouet and the menhir of Nidevelle in Saint-Georges-des-Sept-Voies.

As for the dolmens, they are composed of a big slab laying on two vertical stones. They look like tables and actually are remains of ancient funeral structures which initially where covered by a mass of stones and earth called “tumulus”. They are said to be collective burial places.
There is something special about the dolmens of Anjou: they have a vestibule at the entrance of the burial chamber. The dolmen of Bagneux is huge (5 meters wide by 17,30 meters long), but there are also the dolmens de la Forêt, de la Madeleine and de la Pagerie in Gennes, the Bajoulière in Saint-Rémy-la-Varenne, the Vacherie in Distré, the Pierrelée in Montsoreau, … Most of them are situated on hillsides where their builders most likely had established their settlements.

The structuring role of communication routes

The Roman occupation of the territory has also left an important heritage. The most visible parts of it are the communication routes. After the conquest of Gaul by Julius Caesar in 52 B.C., the Roman administration sets up its road network to ease transport between the main cities of the region.

From the East to the West, the Loire-Anjou-Touraine Park is covered with ancient Roman roads connecting Tours to Angers … or rather Caesarodunum to Juliomagus! This important roadway borders the North shore of the Authion river. It allows the development of small villages called “vicus”. In the 1980s, excavations in Andard unveil vestiges of a “fanum”, a small Gallo-Roman temple with a simple construction scheme based on square foundations most of the time.

In addition to the Tours-Angers axis, a road dating back to the Neolithic period connected other villages which were situated on the present location of the Candes-Saint-Martin, Montsoreau, Saumur, Chênehutte and Gennes. A Gallic oppidum is a fortified settlement often built on a certain height. The oppidum of Chênehutte is situated on a crossroad facing a ford where to cross the Loire.

In the Vienne river valley, Chinon is situated on the junction of roads bordering the river or heading to Loches on the East or to Loudun on the South-west. On the edge of the Park, the hamlet of Mougon in Crouzilles used to be a hot spot of pottery in the 1st and 2nd centuries. It was an important trading place with its own thermae.

Chênehutte is one of the biggest archaeological sites of the Gallo-Roman era in Anjou. It was unveiled in the 18th century. There used to be a fortified village, an “oppidum”, there which existed since the Neolithic period (4500 BC). The so-called “Roman Camp” is situated on a rocky outcrop in order to watch transit on the Loire river. You can still find the ancient ramparts on spot as well as some remains of antic houses.

During the Merovingian period (5th to 8th centuries), the oppidum was used as a warehouse for shelly sand sarcophagi produced in Doué-la-Fontaine. They were then transported or shipped to the other regions of Gaul.

Two decades of excavation starting in 1975 unveiled the existence of a “vicus”, a small Gallo-Roman village right outside of the oppidum. From a bird’s eyes view, it actually looks like an urban scheme. Take a break near the Chênehutte primary school! You will discover the remains of a “fanum”, a small Gallo-Roman temple, there.

In nearby Gennes, you can find another important archaeological heritage site. There are some of the finest remains of the region. The best known one is the Gallo-Roman theatre of Mazerolles, unveiled at the beginning of the 19th century. It is of elliptic shape and leaning against the hillside. There was space for more than 5000 spectators there which makes it one of the biggest antic theatres of the West of France! An underground aqueduct supplied water for the thermae of Gennes (at the present location of the Saint-Vétérin church) as well as for sanctuary dedicated to water gods, the “nymphée” of Mardron. Another temple, most likely dedicated to Mercure, was on the site of today’s the Saint-Eusèbe church.

From wood to stone made dungeons: the origins of the French castle

Most of the royal castles and residences open to visitors today date back to the late Middle Ages or the Renaissance. However, there are some remains from the Carolingian period (9th and 10th centuries).

In La Chapelle, a hamlet of Doué-la-Fontaine, excavations in the late 1960s revealed the presence of a Carolingian “aula”, a big hall where the lords received their subjects. It is a rectangular stone construction built in the 900s for Robert, Count of Poitou. The building replaces a first palace and winter residence of Louis le Pieux (son of Charlemagne) which was destroyed during a Viking pillage around year 845. From 930 to 940, during the conflicts between the Counts of Anjou, Poitou and Blois, the residence burns down. This is when the decision to transform it into a defensive building is taken: the former aula is covered by a motte with a wooden dungeon on top of it. Removal works of the motte have unveiled the existence of this building several centuries after its construction.

Even though only ruins remain, the dungeon of the Langeais castle is still an impressive building. It is square shaped and was built in the late 10th century on the demand of Foulques Nerra, famous Count of Anjou and inventor of the first stone-built dungeons. The dungeon of Langeais castle is maybe the oldest one, overlooking the Loire river. It had a cellar on the ground floor and an aula on the first floor.

The dungeons of Doué-la-Fontaine and Langeais where built more than a century later. They are exceptional witnesses of the beginnings of fortified architecture in France. 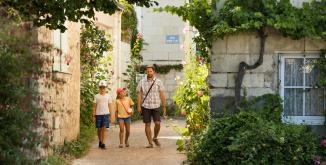 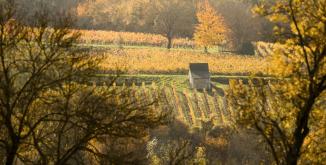 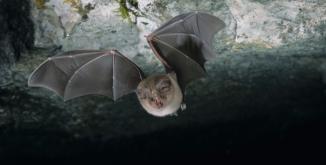